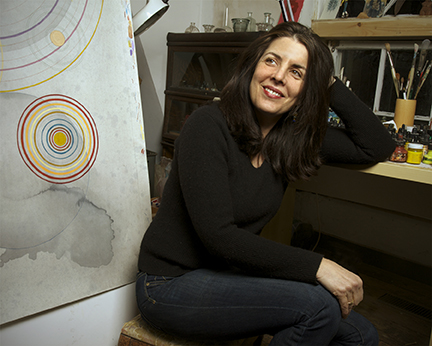 Tayo Heuser was born in Washington D.C. but raised in North, East and West Africa. She returned to the United States to attend college at the Rhode Island School of Design.

in Tunisia Heuser wandered the ruins of Carthage admiring the vast expanses of the former Roman market place and baths, along with the Roman mosaics still embedded in the ground. The Great Mosque of Kairouan with its horseshoe arches and Islamic tiles were mesmerizing.

Thus began her interest in geometry entailed in creating patterns that would continue to inform her artwork for years to come. Libya and the Sudan would be enormous influences too, not only for the Roman ruins but her voyages through the Sahara. The night sky and infinite horizon of the desert would be imprinted on her mind. The other end of the spectrum from the stillness of the desert would be in the Ivory Coast. Heuser would revel in the vibrant color of the textiles worn by the Ivorian people along with the varied and abundant vegetation. Her friend would drive her into the bushland to meet with shamans.

Heuser is a world citizen. Her identity transcends her geography and political borders. Her art work is a confluence of her cultural experiences both visual and spiritual. Her paintings are like portals in that they represent a world of infinite possibilities. There is time for reflectivity and timeless tranquility. They create a heightened perception of the world we live in. They are passageways between her interior and exterior worlds. Her art is a spiritual excavation. She addresses the central theme of cosmic balance between light and darkness, spirit and matter.